I wrote this for my ‘Road Show’ project about Route 1 (www.us1roadshow.com), but thought ‘Postcard’ readers would also enjoy it.

There were a few things you didn’t want to say in my father’s house. ‘Franklin Delano Roosevelt’ was right there at the top of the list.

I come from a long line of card-carrying, cocktail-drinking Republicans with whom I share a deep love of golf and boats and a predilection for mixed drinks, particularly Manhattans. But the sharing usually stopped at politics – and that was long before the party relinquished integrity and any vestige of a moral compass.

Not that I can really blame my dad. My grandfather was a stockbroker in Boston when the bottom fell out of the market in ‘29, and for the next decade he supported his wife and young son by singing in bands and choral groups. The Depression and World War II shaped my father’s perspective in ways probably too numerous to count, and if laying some of that on Roosevelt made him feel better, who was I to criticize?

But I confess I took a certain guilty pleasure in reminding him, in his later years, that the Social Security check he cashed each month came courtesy of FDR’s efforts, and that his Medicare coverage was the handiwork of Lyndon Johnson.

What he would have thought of my pilgrimage to Roosevelt’s summer home on Campobello Island is anyone’s guess.

Campobello isn’t exactly on Route 1. In fact, it’s not even in the country. But it’s not far. Take a left off U.S. 1 South at Whiting onto 189, and follow it 11 miles into Lubec.  Hand the immigration officer your passport at the FDR Memorial Bridge – reply in French to her ‘bonjour’ and you’ll get a big smile – and you’ll find yourself in New Brunswick, Canada.  From there it’s just a minute’s drive to the Roosevelt Cottage and the visitor center.

While visitors have been coming to Campobello since 1855, the island didn’t begin to emerge as a summer retreat until the 1880s. In 1881, businessmen from Boston and New York, banking on a nationalistic movement that saw wealthy Americans turning away from Europe in favor of American vacation destinations such as Newport and Bar Harbor, bought part of the 15-square-mile island. They hoped its charms would draw guests to the three large hotels they’d built, or convince them to buy property for summer cottages.

Sara Delano and James Roosevelt were among the small group of those who did succumb to its beauty. They and their one-year-old son Franklin first visited in 1883, and that same year purchased a partially completed house on the western side of the island. The house was finished by 1885, and became the family’s annual retreat from the heat and social constraints of New York City. 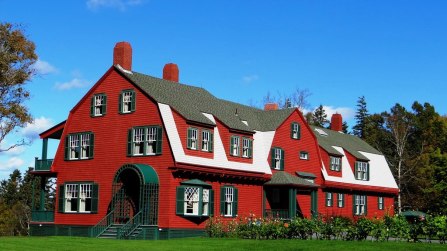 Campobello’s fortunes as a resort fared less well. American life was changing. The automobile provided greater access to other places and opportunities. Increasingly, people no longer had the luxury of entire summers off.  By 1910, all of the hotels on Campobello had closed.  But the purchase of a cottage by a Roosevelt had secured the island a place in history.

Ironically, the Campobello cottage that one typically equates with FDR is not the one in which he spent his boyhood summers.  Those were passed in the house his father and mother purchased in 1883.  Sadly, it no longer stands. The red (technically, I’d call it closer to ‘burnt umber’) 34-room house, dating from 1897 and variously described as ‘Dutch-Colonial’, ‘Shingle Style’ and ‘Arts and Crafts,’ did not come into the Roosevelt family until 1909, when FDR’s mother, Sara, bought it from a Mrs. Hartman Kuhn for $5,000 and gave it to Franklin. He was 27. He and Eleanor and their five children spent summers there from 1909 until 1921 – sailing, fishing, hiking, picnicking, and playing golf and tennis, just as FDR had in his youth. In all, the Roosevelt family tenure on Campobello lasted nearly 70 years.

Some museums fall well short of evoking the era or the people they seek to celebrate. By contrast, the cottage at Campobello succeeds stupendously. It feels as though Franklin and Eleanor and the children have just stepped out for a moment, perhaps to wander down the front lawn to the dock.  All 34 rooms are furnished precisely, and as fully, as they were when the family resided here. It is the small things that catch one’s eye and convey that feeling of immediacy: the big leather megaphone used for hailing boaters, a model yacht built by FDR, the President’s signature pork-pie hat lying on a table.

Much of the credit for the museum must be attributed to the American and Canadian administrators of the Roosevelt Campobello International Park.  It is said to be the only park in the world owned and operated by two countries.  And maybe I’m making this up, but you can sense that, somehow, the Canadians have had a leavening effect on the whole operation.

There is no entry fee; I must have looked around for five minutes for someone to give my money to before realizing the fact. There is no prescribed route through the grounds or the house – one that automatically feeds you through a gift shop and vacuums your wallet before you can exit.  The guides are warm, and friendly, and patient, and deeply knowledgeable, and you get the impression from their anecdotes that each of them knew the Roosevelts personally.  Once away from the cottage, a wide selection of drives and hikes crisscross the nearly 3,000-acre park.  And here and there can be found handy pointers to help you out, such as signs that read, ‘Best Photo Area/Meilleur point de photo.’

To think of what often hangs on serendipity… Although the property remained in the Roosevelt family for decades, Franklin and Eleanor’s fourth child, Elliott, eventually sold it in 1952 to Victor and Armand Hammer. The brothers owned it for a decade, but, failing to find a buyer, eventually donated it to the U.S. and Canadian Governments in 1963. The park opened the following year.

While FDR spent nearly every summer on Campobello as a child and young man, his visits to the island became shorter and more infrequent as his business and political commitments grew.  Finally, in the summer of 1921, at the age of 39, he was able to get away to the island for an extended and much anticipated stay.  It was to prove pivotal.  Not long after he arrived, he began to run a high fever, and lost the use of one leg, and then the other. He languished in bed for weeks, and eventually received the diagnosis: poliomyelitis.  When he was well enough to travel, local fisherman quietly spirited him off the island on a stretcher, avoiding the press.

FDR did not return to Campobello for 12 more years, and then only for three brief visits: in 1933, 1936 and 1939.  Historians attribute his absence to the burdens of office, and no doubt his disability added more challenges – the bridge wasn’t built until 1962 – but I sometimes wonder if it was something else.  For a man who lived such an athletic and vigorous life, Campobello might well have been a bittersweet reminder to him of a life once far less circumscribed. I’m not sure I would have blamed him if he had. Sometimes I imagine that he took that mix of frustration and energy and poured it instead into the public service for which he’s remembered.

‘He would have liked this spot — the rock-bound coast, the blue-green pine forests, the wheeling gulls, the big tides, the graceful curve of a lobster boat putting out from Lubec.’

Finally, I figure out what’s drawn me here on this brilliant October day. I didn’t often agree with my father on politics, or with the career path he wanted me to take. But he imbued in me a love for the things he held dear. He would have liked this spot – the rock-bound coast, the blue-green pine forests, the wheeling gulls, the big tides, the graceful curves of a lobster boat putting out from Lubec.

He would have liked this trip, too. And I think to myself that I would happily trade all the money in the world to have him here with me for even this one, bright morning.

2 thoughts on “Morning at Campobello”